Ken Taylor ventured on to the wine dark seas and sailed his Francis Barkley, a Canadian Ferry.  She barely made a wake as she slipped through the velvety seas that day.

The pond started the day in quiet splendor, but the waters were soon wake tossed by a torpedo armed cruiser and a variety of civilian craft of every berth and beam.

It was a fine day for a cruise on Jarod Black’s beautiful Carnival’s Festivale. Of course, on every cruise it always helps to have a little muscle that’s “got your 6” steaming with you.

These fine craft thought that they could impetuously rule the high seas with no serious challenge until a ship of a completely different scale appeared on the horizon. 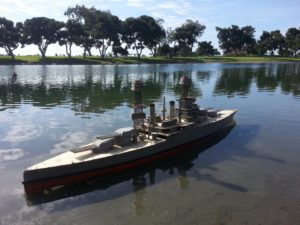 Although she’s in the early stages of a complete refit, Mark Shaw’s massive U.S.S. California could send lots of hurt arcing over to these smaller giants of the waves.

Of course liners and even warships require a little tug now and again so our Mark Weber readies his powerhouse tug boat. However, even if they did indeed need a tow, the docks were taken over by a battle wagon and a heavy cruiser.  The behemoth has new motors and engine controls and a new steering gear.  The ship is probably already 150 pounds lighter than in her vacuum tube remote days.  Even in her current shape, she’s a grand old lady who could still dish it out.  When she’s back in fighting shape we owe Mark a great big re-christening party!

Also on patrol that day was Jeff Sparksworthy’s ever morphing rescue barge on her last cruise before going in for major overhaul. It’s scheduled for new props, improved steering, and festive lighting on its light ship tower. 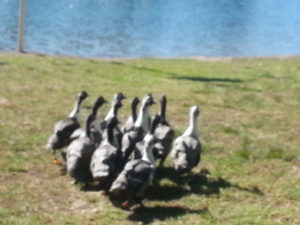 Our fleet of amphibians was bolstered considerably this week by the appearance of an entire squadron of ducks.  They kept better formation than most of the captains on the briny deep that day.

Don Johnson’s fireboat was called into action to stave off the flotilla of waterfowl that were suddenly blockading our fair shores. Ron Tindall’s valiant little barge tug was called in to deal with the duck born hazmat situation.  The cleanup fees will be considerable this month (but Ron just spends all his time and money on new boats). 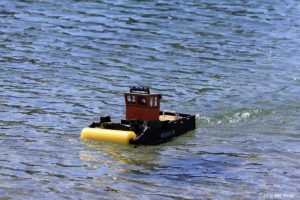 After nearing completion of the nasty hazmat business, the big guns arrived to “keep the sea lanes clear.”

Rob Wood’s Bismarck sailed in with an escort destroyer only to be faced down by a millionaire in his steam yacht and a savvy tug boat captain.

Our precious sovereignty was saved by our plucky old salts, but the gosh darn ducks got away again! 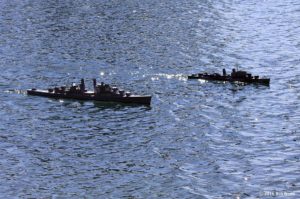 It was another glorious day on the model boat basin that was graced by sleek (and one not so sleek) warships.  Those two destroyers had a very ungainly fore bearer, the U.S.S. Monitor with its distinctive revolving turret.

These little “tin cans” had a fraction of the Monitor’s 8 inches of iron, but they packed a far larger punch and could steam circles around the Civil War relic.

The exploits of brave little escorts like those of “Taffy 3” gave the U.S. Navy one of its finest hours when these ships repelled a crushingly larger Japanese Task Force intent on disrupting the U.S. liberation of the Philippines in WWII.

For more photos and fun, check us out on Facebook.